After the case was adjourned in the Coroner’s Court and the Coroner wrote to the various groups he had set set to protect from my allegations of corruption.  They obliged by dismissing everything. No one was prepared to explain why none of the Police officers were called to the court to give evidence. One can therefore presume that it was a pre-planned intention engineered between the PSNI and the Chief Coroner who had already decided on his findings. I wonder if any of the Coroner’s Office staff was aware of what was going on and did they just choose to close their eyes or enthusiastically supported Leckey. Just how deep did  this go.

Thankfully, someone with integrity within the Police Ombudsman’s Office recognised that what I was saying might have some merit and, on receiving Leckey’s letter, decided not to jump to agree with Leckey but to look again at their previous response to my initial complaint. It might have taken three years and a change of Ombudsman for them to finally arrive at the conclusion that they had got it wrong and that I was mostly right in my initial allegations.

The other recipients of the Coroner’s letter had relied on the Police Ombudsman’s initial letter to the Coroner to cover up their corruption. That untruthful letter was subsequently withdrawn by Ombudsman MaGuire in his apology to me and so kicked the defence stool from beneath the Police.

An apparently insignificant sentence elsewhere in the Ombudsman’s written apology would prove to have an equally critical effect on the direction of this account.

In the aftermath of the adjourned case , I was kept busy sorting out the results of Leckey’s letter to the Police  Ombudsman, Forensics, McBride etc. I had planned to retire from my full-time job and it was apposite to do it now if I was going to devote my time to writing the story of my experience in dealing with the Justice System. Up until what happened in the Coroner’s Court, I was convinced that truth would finally be exposed when those who were lying would be exposed when faced to give evidence under oath. Of course,  I was being naive by basing my belief and confidence on a Justice System suposedly based on the unshakable integrity of people who would defend justice and truth at all costs.  I had not noticed or, most probably, refused to accept that the System had changed. Justice had been set aside and replaced by partiality inequity and partisanship and expediency and evidence was replaced by lies and distortions to achieve the overriding needs  required by those who are tasked to administer it.  They do so happily standing up to their necks in excrement.

I wrote the book in the hope that someone involved in the case would be jolted into finding their morality, integrity or fairness and act accordingly. I used pseudonyms wherever I could to give them a chance to restore their reputations or career. I was sure someone would step forward and say “Let’s start again.” Yes. I was being naive. On the whole it had little or no effect. The only positive response was from the Police Ombudsman but the PSNI treated their findings with the greatest disdain and held them up to ridicule and simply ignored them.

By June 2010 the book was written and printed. As stated previously it was called Junk Justice. I am no great shakes as a writer but I took great care not write anything that I could not support with evidence held by me. Where it was appropriate, I stated that I considered the book as a witness statement by me and swore to its truthful contents. I drew up a list of those involved with the case and informed them of its existence. Friends and family and others who showed a supportive interest were given copies, some were sent to Press outlets and other recipients of free copies included Lord Morrow, chairman of the Committee for Justice at the Northern Ireland Assembly and the Minister of Justice David Ford. Several other copies went to members of the Policing Board. The response was sparse in the extreme. I didn’t even receive any acknowledgement of receipt of the book from either the committee of Justice or the Minister for Justice Ford.

Here is a copy of the letter I later sent to David Ford MLA Minister for Justice after 6 months without acknowledgement. 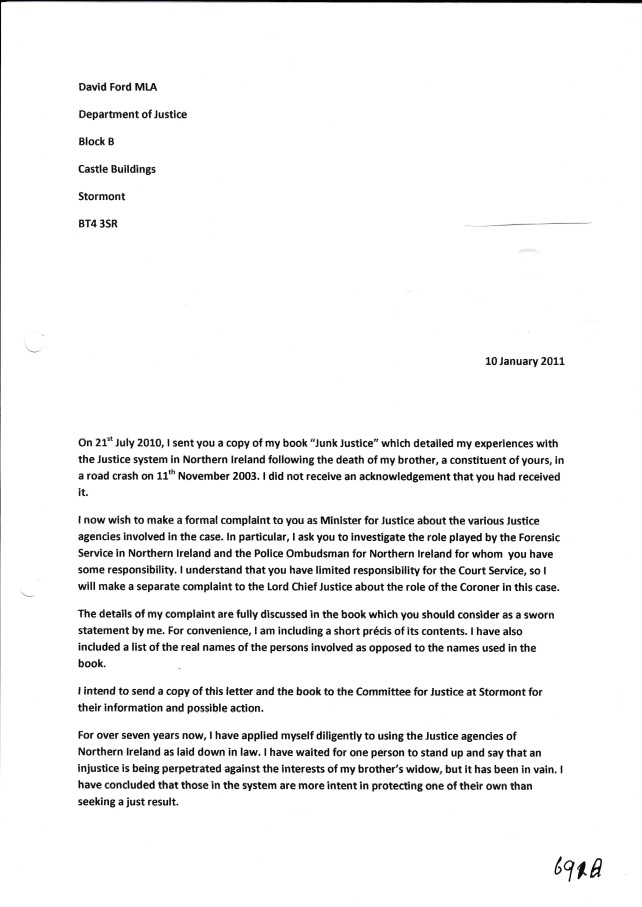 The Committee For Justice, under the leadership of the comedian Lord Morrow who finds the RHI fraud scandal a hilarious joke, acknowledged receipt of the book some 9 months after receiving it and just then forwarded it to the Department of Justice, not to act on it but to “comment.”

A couple of weeks later, I received the following letter from the Minister of Justice. 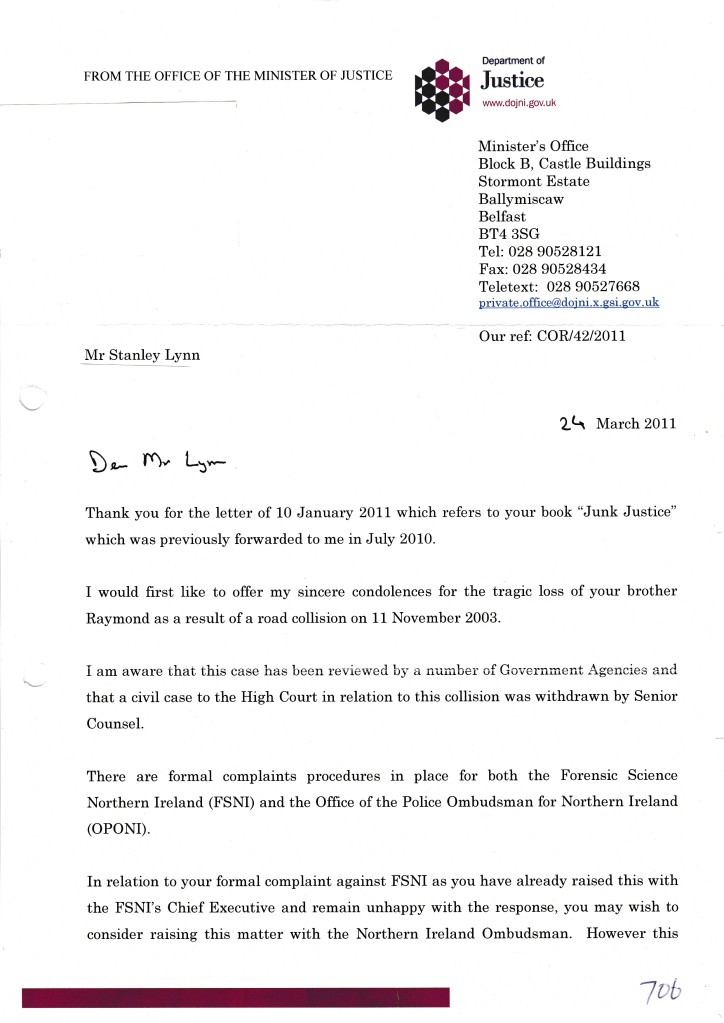 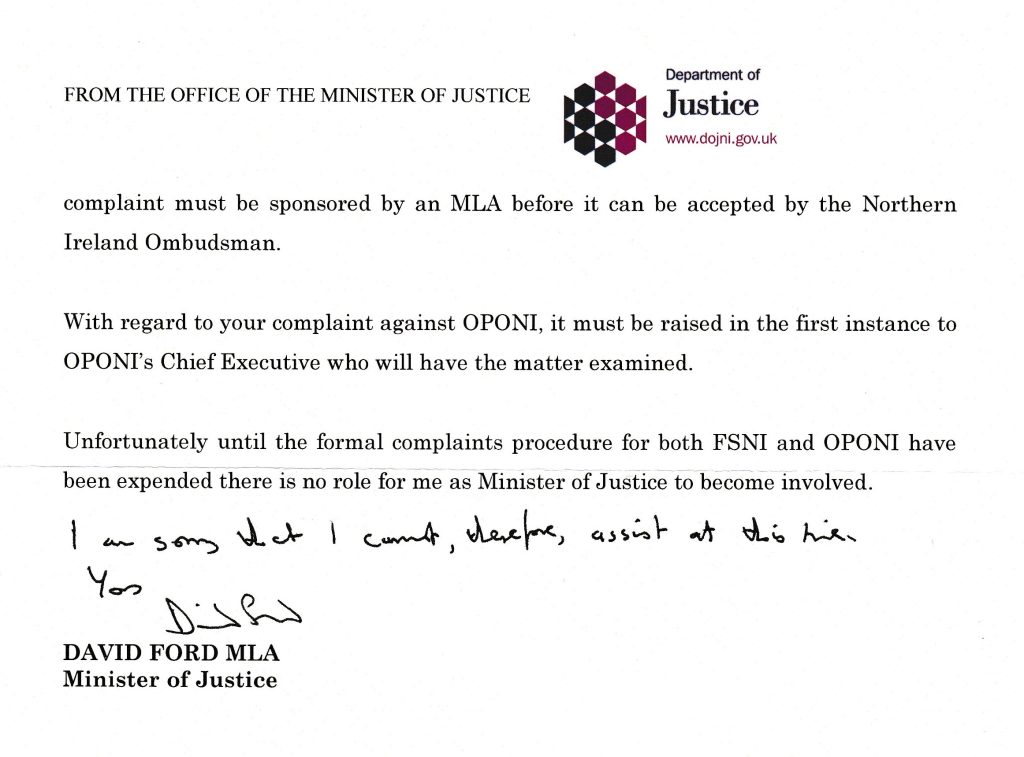 Whether it was one of his staff or Ford himself it was clear that no one had read any part of the book. They hadn’t even bothered to read the index at the front.  Had they have done so they would have understood that I had already been through the entire complaints procedures with the exception of the Northern Ireland Ombudsman and that was in hand. The last line of his letter was a perfect reflection of the same tactic used by Pontius Pilot.  I wasn’t shocked. Knowing the man, I expected nothing more.Whatever you might think about the continued closure of the Assembly at Stormont, you are at least being spared having to be governed by the least competent or effective  Ministry for Justice that could ever have been created. Avoid them at all costs.

Every letter, almost without exception, I have received from official sources always begins or ends with a line similar to this one. It says :

” I would like to offer my sincere condolences for the tragic loss of your brother Raymond as a result of a road collision.”

Given the circumstances, am I alone in thinking that this insertion is nothing more than rank hypocrisy and offensive in the extreme.  It is a mockery.

The next post will  be about my submission to the Lord Chief Justice. The post after that will recount the outragous and secret behaviour of Coroner Leckey.

View all posts by msl23golf